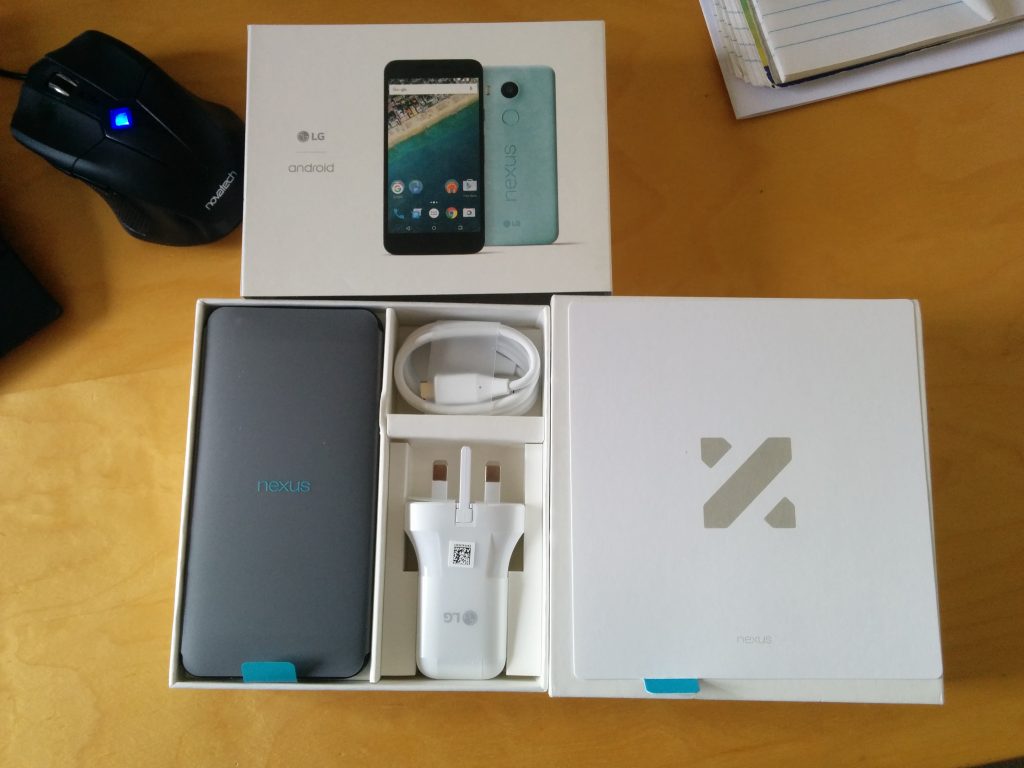 So it seems my love affair with Google’s Nexus range hasn’t been too badly damaged by the Nexus 9 experience, largely due to my painless daily use of a Nexus 5 phone for a good few years now. Like all good things that has now come to an end; it’s time for a change to ensure I get the full use of Android Nougat when it’s launched later this year. With that in mind, I decided to bite the bullet and get a Nexus 5X – after all, it seems the next sensible step after my great experiences with the Nexus 5.

Granted, it has been out for a while now (and I did wait for the price to drop) but a sale made it too good to pass up, so I purchased it. The plan being that the 5X, along with my sim only package on Three, will keep me going for a while now (unless someone wants me to test drive a phone for them?).

What is the Nexus 5X?

Seems a reasonable question for any of you who have not heard of it before. It is the second five-inch handset from Google and LG, and has much-upgraded hardware over the original Nexus 5, as well as some nice built in extras (including a fingerprint reader and one of the best camera’s to be found in a mobile handset).
LG Nexus 5X hardware specifications

The phone came nicely presented in a box with sliding sleeve that, once removed, let you remove the lid and expose the contents as per the cover photo.

The box contained the phone, USB C charger and cable, a small tool to remove sim port cover, and the usual quick start leaflets etc. The handset has a very nice feel in the hand, and the weight is Ok. Side by side, the screen appears to be larger height wise than my old Nexus 5, but the width looks very similar.

This is always the time-consuming part, but it’s not anywhere near as bad as it used to be. With the use of a Google account, and your data being backed up online in various guises, it is now a much easier process when it comes to re-establishing a phone, or setting up a new one.

I choose the option on setup to transfer account information from a previous device. Following the onscreen instructions, I simply touched the back of the devices together and the transfer started. In a short time the account and then all the apps and setting came across to the new handset.

I still had to do some final tweaking in various apps to allow them to update on the new device, as well as some minor setup on the device itself, before I transferred the music and files I wanted across to my new device from my old one. But that was it, the phone was running and Bob’s your uncle. (Well I did have an Uncle Bob.)

Out of the box, the phone updated the Operating system – getting all the security fixes it had missed while it was hibernating. So here we are, after around 40 minutes for account transfer and updates, with a handset that’s ready to go.

How has the last 5 days been?

I have been using it for around 5 days at the time of writing, and here are my initial thoughts and experiences.

First of all, I must say I am impressed, it is great to use and feels great in the hand – I have it in a new case for extra protection. My biggest issue, if I had one, would be the USB C charging scenario – it sounds great and gives fast charging. Sadly the cable supplied with the phone has USB C at both ends and does not plug into my ANKER charging hub, it only plugs into the charger that came with the phone. I can’t even use it at my laptop to charge via a USB port. This is a bit of a nuisance and needs to be addressed – it has required me to purchase a separate cable with USB C at the phone end and a standard USB plug at the other. I will now need a few of these for the car and other areas I charge the phone a lot, leading to extra costs.

My other issue is no QI charging. I have a pad in my lounge that I used to drop my Nexus 5 onto and it charged. At my desk, I had a stand that I placed my Nexus 5 into and it charged. Sadly now neither of them can be used. Why drop this great way of charging a device?  It was very easy and meant there was no need to fumble about with cables. It seemed like the future, and yet it has been now taken out of the equation again.

The phone use itself is similar to the Nexus 5, in my day to day use the battery doesn’t seem much improved – I am still charging each night for the next day’s use. Screen seems sharper, and I am impressed by the fingerprint unlock – this means I can pick the phone up with either hand and it can be instantly unlocked with the touch of finger. The camera delivers very clear pictures, and the video allows for slow motion and delivers a nice clear picture as well.

Had to fit in a terminator quote somewhere. I will be back over the next few weeks with my findings as I use it for work and social purposes. But so far so good. Just need Google to sort the Nexus Tablet range out and I’ll be a happy chappy again.