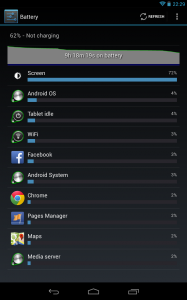 Here is the final part of the test drive.
Day 5
Went to use the Nexus this morning and I had put it on charge overnight so it should be full again. Unplugged it and switched it on and everything OK. Used it for a few hours on and off, in between laptop usage etc. Then glanced at the battery symbol to see it was very low. Brought down the info and it indeed was at 31%. I then thought through all I had done and thought there must have be a battery issue. Sorry it wasn’t the Nexus fault it was mine. I realised I had indeed plugged it in overnight, but had not pushed the connector in until it clicked into the Nexus. So it had not been on charge at all. DOH!
Anyhow back to the unit and all its uses. Today I played with it and pushed it to switch between Apps and Surf the net and my usual Facebook and social media feeds for checking. I read and answered emails on it and did it falter? No, it just kept producing the same high level of performance.
I intend tomorrow to take a screen shot of the battery in the evening after the unit has been used during the day, just to prove to you that it does live up to the praise I am heaping upon it.
I have also asked two contacts of mine, one who is an IT Guru and super GEEK and another who is a discerning architect. Both have the Nexus 7 and I simply asked what are your thoughts. They both heaped praise on it. One stating that he uses it more than his laptop now. The other said very fast Internet surfing. No complaints, even his kids use it and think it its brilliant. So it’s not just me that is experiencing this performance.
I will report tomorrow and sum up my overall opinion of the Nexus 7.
I bet you can’t wait.
Day 6
Used tablet most of the day today. External locations connecting to networks easily and fast. Tried screen tester programme to see graphics and speed. All I can say is it doesn’t phase this unit at all.
I will miss this tablet when giving it back and can easily see myself getting one of my own.
Just to round things up and to prove the battery usage I have attached a photo screenshot of the battery at the end of day 5.
To summarise
This has been a great test drive and I can only recommend all aspects of the Nexus 7. It has not let me down no matter what I have thrown at it. Even moving from a 10 inch to a 7 inch has not phased me due to the excellent resolution.
The cost of this unit is also excellent and the apps available through the play store are just amazing.
How would I rate it? 9 out of 10. I had to drop one point just to seem fair.
Hope you found this useful, let me know your thoughts.