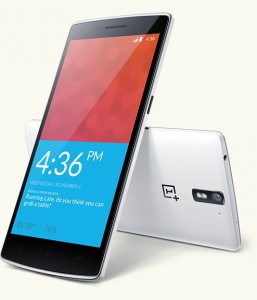 Before arriving in the land of OnePlus, I had owned an HTC Desire, HTC Desire HD, Nobrand Chinese Phone™, and a Nexus 4 – the N4 being the nicest phone I had owned to date. Being nexus device, it was thoroughly hackable – I was frequently installing different ROM’s, kernels, etc. to get the most out of it. In finding out about the OPO, I was looking to see if the same flexibility would be present (and guaranteed to remain so). I wasn’t disappointed.

This is the trickiest part. Having found out about the phone late summer, I was only really in the market for a new phone around October – this was, as family can vouch for, my time of bombarding social media feeds with competitions (winning is better than buying on the wallet) and posting inane chatter on the OnePlus forums. This is the prescribed way of getting an invite, which currently, of December 2014, is the only real way of getting a device (the two preorders seemed a bit shambolic with many users complaining of problems placing orders).

The OPO arrived in reasonable time and I set about unboxing it. What arrived was an envelope which contained a box, which just so happened to have more boxes inside. Boxception. However, a nice boxception with the inner boxes being fashionably designed and pleasing to look at. This being said, I didn’t look at them for long. The device itself is a large (coming from an N4) phablet, with a nicely textured back (I ordered the 64 GB “sandstone” model). I also ordered a clear clip-on case to prevent the device getting mangled when lying on desks.

Here are some pictures of the unboxing (admittedly, pretty poor pictures – I was in a hurry to unbox!): Images of unboxing. There’s also a size comparison between the Nexus 4 and the OPO.

Notice the plain, cardboard box that it all comes in. Fairly minimalistic!

“This thing is BIG, but not too bulky…” This would be how I feel about the device a month down the line. It’s a big device to handle. My Wife is completely not interested in using it, as it’s too large for her hands. My hands, whilst not gigantic, have pretty good reach…and I still find myself using both of them to access menus.

In use, the OPO is a fast, responsive and pleasant device. CM11s (the custom version of CyanogenMod that runs on the OPO as stock) is well tailored to the device. I had no lag flicking through menus, no issues watching Netflix, or streaming content. It’s quite hard to tax the quad core 801 – 3Gb RAM helps to keep things moving along.

The 5.5” screen is gorgeous. I had read online that the colours aren’t as vibrant as other devices, and the blacks aren’t as black – I haven’t found this to be the case. It looks good. It responds well. The colours seem reasonably accurate – enough for a phone anyways. I don’t plan on doing huge amounts of image/video editing on the OPO!

Does it fit in pockets?

Sure does! Gets a bit awkward trying to sit down sometimes, but a little shuffling and all is well. If you’re a skinny-jeans type…you’ll definitely need another solution though!

Does it work well as a phone?

How does it cope with media, Netflix, Google Play Music, Movie files etc.?

I’ve not noticed any slowdown, or difficulties in playing files, until I started using a Lollipop ROM where codecs weren’t quite plumbed in. This was soon resolved, and now I can watch movies and listen to music/podcasts to my heart’s content.

Any good as a PDA? Is the term ‘PDA’ even still used?

Seems to be. The large screen is excellent for reading emails and web pages, viewing calendar entries, as well as social media feeds. The only downside to such a screen is the distance your fingers have to travel: the OPO is a big phone. As for using the term ‘PDA’, this was how I used to rock and roll: Palm IIIe.

As far as phone cameras go, the OPO is pretty good! I’ve never had a phone camera that can take such detailed and rich photos as the OPO. The ability to shoot and save a .DNG is a boon too: when things aren’t quite right, you can quickly adjust in your favourite editor and hopefully sort them out. They offer much more latitude than the standard JPEG output. See this link right here for some examples.

That screen looks good, but is it a pain to hold and use? How does it fare with colours? What about this yellow tinge™ I’ve read about?

A wee bit pain is a good thing, right? Means you know you’re alive! This was a valid concern for me when purchasing the phone – the Nexus 4 is a 4.7” device, so screen size wasn’t an issue as my ever-agile thumbs could quickly jump across the whole screen. Whilst the OPO did present problems at first I quickly adjusted – there’s a crafty way of holding it one-handed that allows for a slight adjustment and the top of screen is then usable. Take my word for it!

The yellow tinge that folks have been moaning about – this I did notice, and it bothered me for all of 30 seconds after which I realised that the amount of time I’d be staring at a pure white screen was pretty minimal. I’ve stopped noticing it now, and it hasn’t affected my use of the OPO at all. Even on text-heavy sites, where there’s lots of white-space its fine. Seems like folks have been finding this to be an issue that resolves itself over time (or with the use of a UV lamp…): Reddit page about the issue going away.

What’s the battery life like? Does it last all day with moderate usage?

This is where the OPO shines for me. I commute to work (roughly 40 minutes each way) and I enjoy listening to podcasts there and back. On previous phones, I could do this but would always have a nagging sensation that I’d run out of juice if I then wanted to view media/play games/photo edit etc. during the day. With the OPO, I don’t need to worry: the SoC (SnapDragon 801) has a nifty feature for audio playback which really maximises battery life. Watch the video explaining it all here. This has certainly proved true for me. Negligible battery drain whilst commuting, enough juice to back up the phone, download and flash ROM’s, play some games (Godus is the current favourite) and pfaff around on social media. Photos and the occasional video on a lunchtime stroll happen fairly regularly. At the end of day, I’m sitting happy with 30-40% left. This is without any custom kernels or underclocking.

So you enjoy some gaming – what games run well, and how’s the performance?

So far I’ve played some Ravensword (which runs well, but I’m convinced could look better), Godus, Carmageddon (looks identical to how I remember it back in the day), Cogs…so some new, some graphically intensive. So far, nothing has troubled it, although I did notice that Godus had intermittent issues – but I thought this was more likely the nightly CM12 build I’m on rather than the OPO.

There was a recent kerfuffle between OnePlus and CyanogenMod…

Ah, yes. This came across as playground politics. The OPO is still guaranteed updates for the next two years from CyanogenMod, so I’m not that bothered.

Are there any caveats with the device? Anything that should make a potential buyer reconsider?

The only thing that I’ve read, that really seems to be a tripping point, is the returns procedure. It seems to be overly complicated and I’ve not really read of anyone successfully managing to return a device…but then again, I’ve not really been needing to research this as my OPO is currently working fine.

The only real caveat for me is the unwillingness of insurance companies to insure. My current company rejected my custom after I informed them I would like to change my policy to cover the OPO. Supposedly the OPO wasn’t shipped from Britain (it was, from the British warehouse OnePlus put in place). I reckon they didn’t know what it was, and so refused to insure. For £281 delivered though…is insurance something I need to concern myself with? The verdict is still out!

Buy this phone. If warranties are a concern, realise that you’re getting a high-end device (I know it’s not cutting edge, but then for £281? C’mon!) For not a lot. The build quality is good, the individual components are great, and the overall experience is pleasant. I’ve not looked back! This is genuinely the best device I’ve owned so far.

1 thought on “OnePlus One Phone Review”