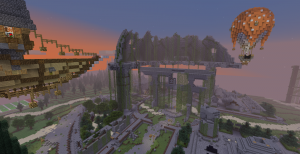 I want to admit something – I’m approaching 35 years old and… I play Minecraft. I know, I know… I just tried it one day to see what the fuss was, and one mining session led to another and, before I knew what I was doing, I was hooked.

I’d be very surprised if you haven’t heard of Minecraft but, just in case, here’s the deal. The game takes place in a world of low resolution blocks (or voxels). You spend your time mining for stone, metals, or just plain old dirt and, when you’ve done some mining, you make things from the materials you’ve found. There are elements of danger, like the monsters that spawn in the dark, and you need to consider your food needs by farming animals, plants, or chopping down trees and hoping you find some apples. In a nutshell, though, Minecraft is all about mining and crafting. Kind of makes sense, doesn’t it?

The thing is it’s an incredibly popular game and I sometimes wonder why. Even while I’m playing it, I find myself thinking, “What am I doing? Why do I keep coming back to this?” Well, believe it or not, I think Minecraft taps into something at the heart of being human: the desire to create.

Think for a minute of a child who’s just produced a drawing – the air of excitement as they come to you and say, “Look daddy! Look what I did!” We still have a castle made out of a cardboard box that my daughter won’t let me throw out, even though it’s a couple of years old and definitely looking past its best. Why can’t we get rid of it? “Because I made it”, is the reply.

From pretty early on in life, we want to exercise our imagination and creativity. I think that’s why a big bucket of LEGO is a great way to pass an afternoon (and, yes, I still play with LEGO too). The chance to just sit down and create something is both great fun and very satisfying.

Coming back to Minecraft… it’s like a virtual LEGO bucket. There’s pretty much no limit to the structures you can create and you don’t have to go to the bother of extending the garage to accommodate particularly large models.

So far so good, but my Minecraft playing eventually tailed off until I decided to have a look at a multiplayer server (I play on Sublimity Gaming). Suddenly I got to see what other people had built, got ideas of what I could do, and got to build with other people. It kind of spurred me on to build bigger and better things as other people’s creativity informed my own.

It was about this time I started to encounter Redstone – an electrical conductor from Minecraft that can be used to build some pretty complex circuits. Redstone can be used to automate functions in the game, build dynamic mazes, and even some very complex multiplayer dungeons. I haven’t really got into building Redstone circuits but some of the players I’ve spoken to have build some amazing contraptions. And they’re proud of what they’ve created.

Interestingly, I’ve also spoken to the son of a family friend who is learning circuit design through experimenting with Redstone. He’s coming out with concepts and ideas that I didn’t engage with seriously until university, and he’s only just gone to High School. I’m not about to pretend that Minecraft is an educational tool, but it’s interesting to see that it is bringing some real benefits!

The creative desire spills over into other areas of life outside of play, of course. Have you ever tried baking a cake and just been so proud of the result? Or perhaps you’ve repainted the house and, on top of the fact that the house now looks nicer, proudly thought, “I did that”. Perhaps you’re an honest to goodness artist – in which case creativity is your lifeblood.

My main line of work is as a freelance IT consultant, and I love it when I get the chance to be creative. Whether it’s building a mobile phone app, designing a website, or writing an IT department’s newsletter, I relish the opportunity to make stuff. And I’ll freely admit that I’m the sort of person who looks at the result and says, “I made that”.

This post isn’t intended as an advert for Minecraft – some people will love it and some will think it’s a complete waste of time. But this is the result of me thinking about why it’s such a popular game. My answer? I think it gives people the opportunity to create, and that desire is built in to each and every one of us.

What do you think?

Chris Hinton is a freelance IT Consultant from Fife, Scotland. He is married with two young children, and writes at www.geek-speak.co.uk.